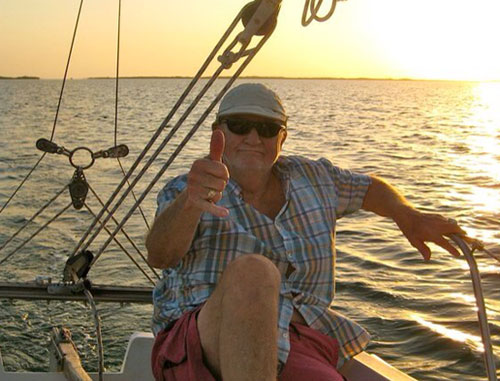 Ross LewAllen
There are no words that can capture and explain the essence of this extraordinary soul. Ross left us sooner than expected but lived more in this life than most live in 20 lives. Originally from Chicago, a graduate of Northwestern University and Highlands University in Las Vegas, NM, he found his home in Santa Fe in the early 70's. He was an extraordinary teacher, artist, jeweler, traveler, sailor, fisherman, father, grandfather, husband, brother (to his men), magic man and shaman. He lived enthusiastically and joyfully with a bucket list of visiting the wonders of the world. He made it to most, but mostly he made wonder wherever he was. He was the originator of the Earcuff jewelry design, an amazing and prolific jeweler. He and his gallery has been an icon on the corner of the plaza (Lewallen Jewelry) which he opened in 1974. With his daughter Laura and grandson Takis joining him in later years, LewAllen Jewelry has been a magical presence in Santa Fe. He is survived by his daughter Laura, grandson Takis Thayer, his loving friend Hanne Moller, nephews Ron Bryant and David Bryant, niece Judy Patnaude, and a monumental circle of friends. Memorial service to be announced. In lieu of flowers gifts can be made in honor of Ross to the Lewallen Family Fund, SF Community Foundation, P.O. Box 1827, SF, NM 87504